Think about this: the weirdest thing about getting older is that I (and you too!) can officially say I have been friends with someone for 20 years. Except I don’t know that it’s that weird because we love that we can finally say 20 YEARS!!! Haha

Fun fact: Stef’s family is from Rochester, NY. In 1996, they moved in across the street from my family in Pittsburgh. Stef and I were attached at the hip from the very first day they moved in until the very last day they lived in that house two years later…and somehow we managed to stay friends all this time.

I think that it is SO much easier to stay in contact with friends now. Social media practically does the work for us! Our long distance friendship started with snail mail and long distance phone calls on Sunday because it only cost a penny a minute. We also convinced our moms that we should visit each other EVERY summer, and they listened to us. So every summer I would spend a week in Rochester and Stef would spend a week in Pittsburgh. Except it was more like me in Rochester for 5 days and Stef in Pittsburgh for 9 days because I used to get crazy homesick and she would get SO mad at me. Hahaha 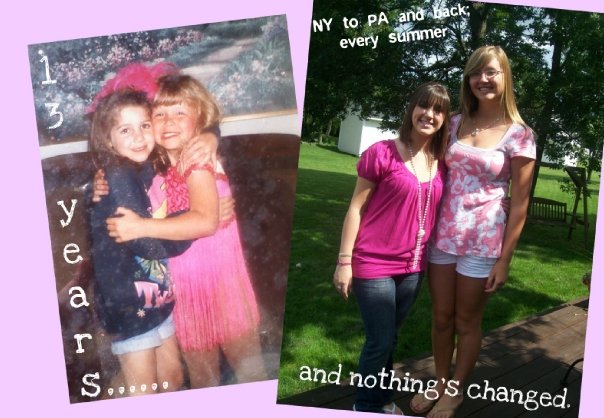 Then came high school and crazy busy schedules. The visits may not have happened as much as we would have liked, but we had AIM, MySpace, text messages, and Facebook. We both made it to each other’s high school graduation parties and I think that’s when we really knew we’d be stuck with each other forever. 😉 This past weekend, I finally got back up to Rochester to visit her! In the past five years while we’ve been in college and figuring out the real world, we’ve visited a bunch of times, but she has either been in Pittsburgh or DC, so it was high time that I take myself back up to NY! 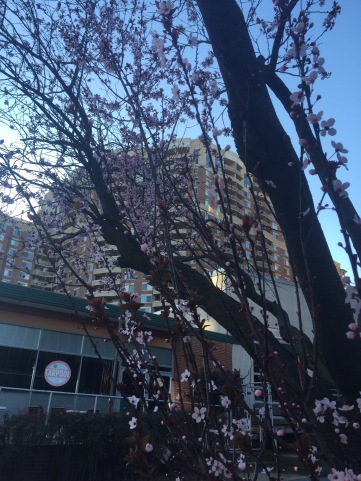 Pre-road trip, I took myself on a 3 mile run to start the day. I ran into this creepy dog statue and saw some budding trees. #hallelujahitsspring 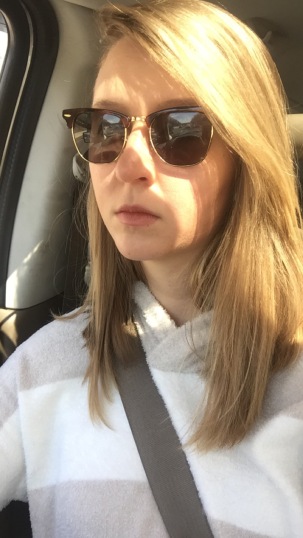 I left a little later than I would have liked because that’s how I roll, and I ran into three traffic jams on the way out of DC. #normal I always get really angry when I’m stuck in traffic because of an accident, but then I get mad at myself for being mad because really, I should be hoping everyone is okay! I justify my anger by saying I’m really only mad at the cars who drive slowly past the accident and stare at everything to see what happened. Ha!

I took the scenic route because it was an hour shorter than my other two options, and my drive was filled with open roads, mountains, motels, and rivers. As soon as I crossed the state line into New York, it started to snow and hail. I almost turned around. Hahaha! After all, this was the start of my Spring Break! 😉 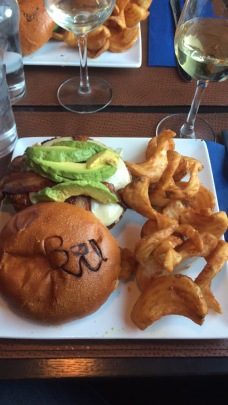 Traveling with me looks a lot like empty water bottles and random snacks on the floor. I had yogurt (because the big container was almost gone and I didn’t want to throw it out), carrots and celery with ranch, trail mix, and Shakeology. As soon as I got to Stef’s house, which was around 6 PM, we headed straight to dinner. She had just finished work, I had sworn myself off of trail mix, and we were both starving. We met up with her parents at Blu Wolf and ordered the most delicious turkey burgers! Her dad dared to be different and ordered chicken and waffles. Have you ever tried that dish? I always want to and then I end up with something tried and true! 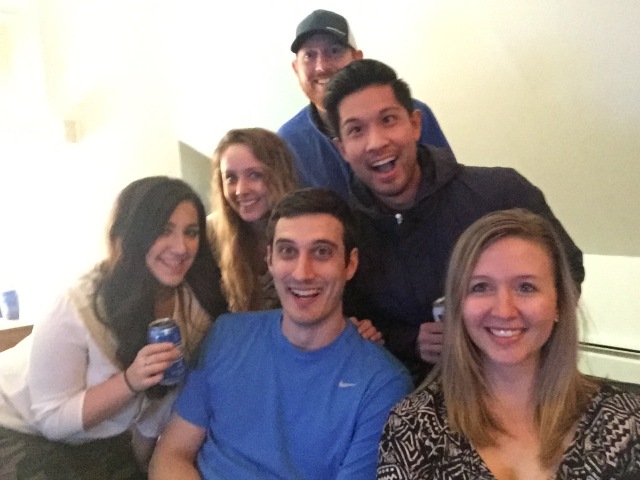 Later that night, I got to meet some of her friends from work. Someone had just gotten a selfie stick, and as the only person in the room who has used a selfie stick before, it was my job to teach everyone what to do. 🙂 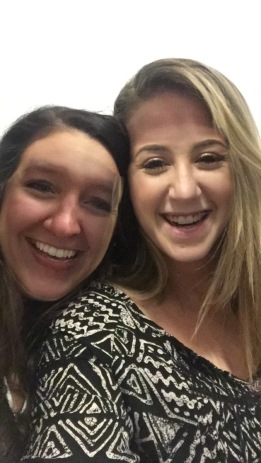 Then of course we faceswapped because this is 2016 and how can you not do such a thing? My face does NOT look good on her head. It’s too big or something! Hahaha 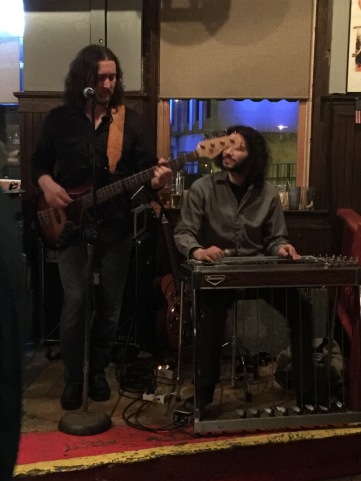 After dinner in the Park Ave area of Rochester, we headed downtown to hear her friend’s band play at Dino, a barbecue restaurant. It was fun to see different parts of the city because I haven’t been there in so long and the last time I visited, she still lived with her parents in the suburbs. The band is called Teagan and the Tweeds and they are pretty well known in the area, apparently! They’ve been playing together for ten years and they played the perfect mix of original tunes and oldies but goodies that we all know. We ended our evening with our favorite twins, Mary Kate and Ashley Olsen. We will never grow out of their movies. 😉 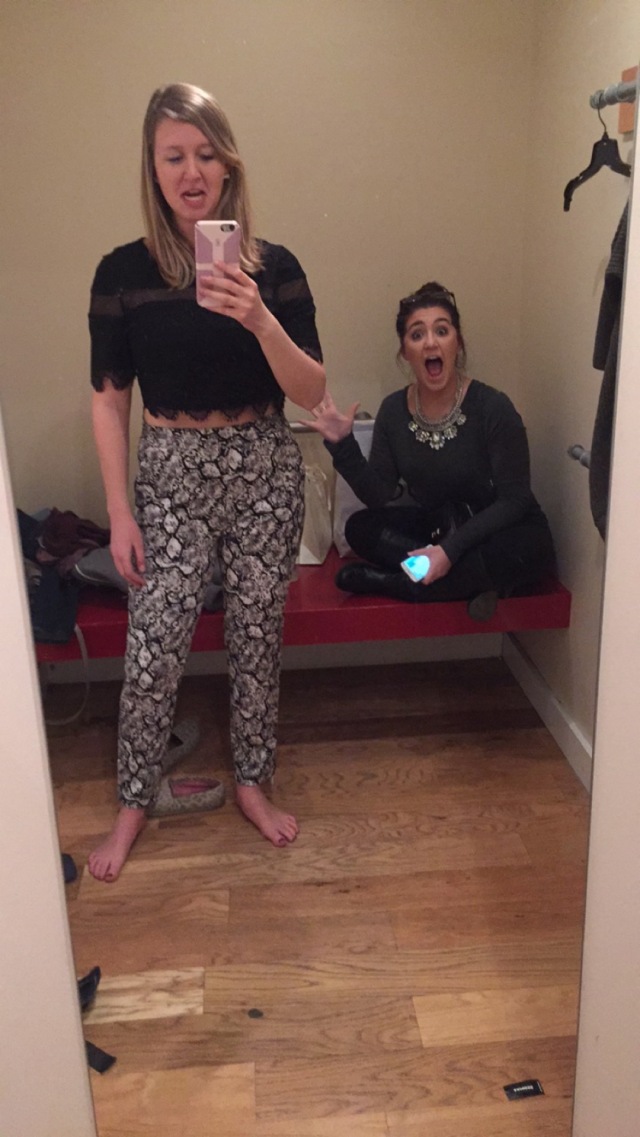 On Saturday morning, we lounged around eating breakfast and watching another MK&A movie before hitting the mall. We always shop when we are together. 🙂 I think we were at the mall for like five hours, so we definitely made a dent in our wallets! I was having no luck finding anything I liked and then I spotted these snakeskin pants. My initial thought was that they would be perfect dress pants for work, since they’re the right material and they’re high waisted (aka appropriate). Then I found this black crop top on sale and Stef told me I HAD to try it on because it would make such a cute outfit. My face should explain to you how I feel about crop tops. Hahaha

But apparently I don’t dislike crop tops enough to not purchase one, because I ended up wearing that exact outfit to meet some of Stef’s college friends that evening. We had Moscow Mules at a cocktail lounge in another part of downtown called South Wedge. Our group was definitely the youngest bunch in there by at least ten years, but one of her friends was so excited to take us to Cheshire that we had to give it a chance! It’s above a wine bar, so it’s kind of hard to find because you have to go IN the wine bar to get to the cocktail lounge. That was kind of cool because it felt like a hidden gem! My takeaways: it was SUPER dark in there and the drinks were small and expensive. #cheapskate 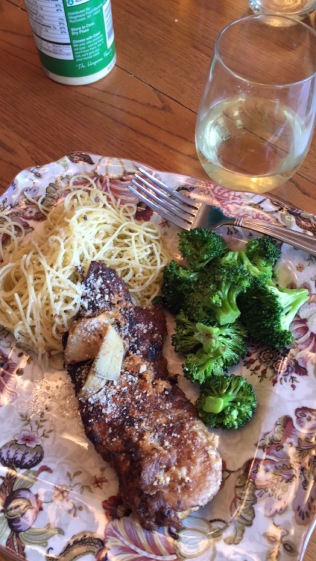 Our day on Sunday revolved completely around food. We had brunch plans at Trata where I had the most delicious omelette with cajun sausage, corn, pepperjack cheese, and red peppers. Fun fact about NY State: they don’t serve alcohol on Sunday until after 12 noon. We were STARVING when we woke up on this morning, so after wasting as much time as humanly possible at her house, she and I and her roommate decided we were just GOING and maybe we would eat for a long time and have time to order a mimosa. Well, we got there at 10:30, ordered our food, inhaled it, and then promptly decided we all needed a nap. No mimosas for us. 😉

We watched My Big Fat Greek Wedding and a few episodes of Friends while everyone lounged around for the afternoon…then it was off to her parents’ house in the suburbs for dinner! This was bittersweet because they just sold their house so this was the last time I would see it before they move! Stef’s brother was also at dinner which was so fun because we always reminisce about being kids…and of course her parents broke out the childhood photos as they are in the middle of packing up their house and there are pictures galore!

I left the frigid north behind and headed back to Pittsburgh for the rest of my Spring Break on Monday morning. I was greeted by two overly excited dogs who only sat still for that photo because I was holding treats in my other hand. 😉

How do you Spring Break?
Do you travel or are you a staycation-er?